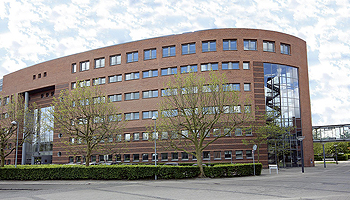 Lyngby Port is an office building in portfolio of a Danish property company Nordea Ejendomme. The building is built in 1992 and divided into 3 building segments; A, B and C at Lyngby Hovedgade 94, 96 and 98. The building consisted of cell offices grouped in modules. New tenants are expected in larger parts of the building (more open office areas, higher number of employees).

Total measured energy use before renovations was 124 kWh/m2 per year (including tenants’ electricity). Due to planned tenant adjustments of indoor climate and increase of number of occupants, the energy use of the building was estimated to increase to about 131 kWh/m2 per year. This was set as a new baseline for energy efficiency measures. The proposed action package in Step 1 contained seven energy saving measures, which were planned to be carried out as part of the upcoming renovation for the tenant adjustments. The estimated energy saving potential was about 20% for heating and about 23% for electricity compared to the baseline. The internal rate of return of the action package was approximately 5%.

Four measures were carried out in Step 2 with some modifications to the initial plans. The renovation finished entirely in 2016 only for part of the building. The presented results are therefore only valid for that part and they were scaled for the rest of the building.

The total heat energy consumption after renovations decreased by 19% compared to the baseline (higher saving than the calculations). The total common electricity consumption after renovations decreased by 21% (lower saving than the calculations). The calibration of the systems is still ongoing and at the moment the achieved internal rate of return is 4%.

The building Ballerup Town Hall is an office building owned by Ballerup Kommune is located in Ballerup, Denmark. The building was built in 1975 and occupies 600 persons on a heated floor area of 17000 m². There was one major extension and refurbishment of the building and the building service systems in 2011. The energy use of the building before renovation was about 155 kWh/m2 yr. In Step 1 an action package of energy efficiency improvement measures was formed including 3 energy saving measures, providing energy saving potential about 50% for heating and about 30% for electricity. The internal rate of return of the action package was approximately 10%.

Step 2 of the Total Concept method has not been carried out yet at the town hall of Ballerup.